If you have watched the weather in the last week or so you know the east coast has been pounded with snow and blizzard like conditions. About a month ago we were in the midst of a “blizzard.” We got around 9 inches of snow but the wind ended up being the problem and drifted our road shut. At one point 4 trucks were stuck! Men, they all kept thinking their trucks were bigger and tougher and they could pull the other one out and ended up getting themselves stuck! Our county was on emergency travel only…but you know boys and their toys!

I loved snow days as a child, making snowmen or playing cards with the family made the perfect winter day. But, believe it or not, cows don’t take snow days! They still need to be fed and milked.

My hubby was getting really nervous that he wouldn’t be able to get around the trucks to the farm. So, he  called one of the guys that works for us and he brought one of our bigger tractors and cleared the road. He also ended up having a slumber party with us a.k.a. he couldn’t get home. To top it off, it was his birthday!

My husband also wanted to get a picture of our little guy with the snow. 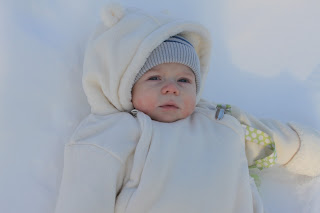 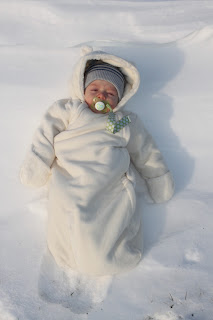 It was important for him to get a picture because his whole life he has heard stories about the blizzard of 1978. I am dating my husband here but he was only three weeks old during that blizzard. Of course during our recent blizzard we got to hear the story from my Father-in-law all over again!
My Father-in-law lived just shy of a 1/2 mile from the farm and needed to make his way to the farm to check on everything. He had a new 78 Chevy 4 wheel drive (he could have just said a new pickup, remember boys and their toys!). He made it about half way to the farm when he hit a drift and was stuck. He walked the remainder of the way in snow drifts up to his rump, those of you who personally know him know he didn’t say rump, I had to clean it up! He isn’t the tallest man on the planet either!
There were 60 mile per hour winds and it was all he could do to get to the farm. He said his eyebrows were frozen from the snow! He ended up staying at the farm for 2 full days. My Mother-in-law was snowed in at the house by herself with a newborn, a 15-month old and two older kids. Could you imagine…?
So, do you have any good blizzard stories?