There are a lot of “dirty” jobs on a dairy farm! In fact, when I told some of the guys what my “dirty job” post was going to be about they thought I was kidding!

No really… especially one picture we will get to soon. But, before we go there I wanted to show you some pictures of my drive to the dairy. 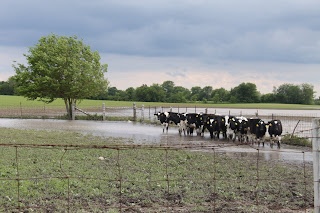 Meet a group of heifers…I refer to this group as the teens and 20’s group. Like humans that age they push the limits… the rest of the pasture isn’t under water, yet they decide to stand in the water… does it make them dirty, why yes it does!
Speaking of water, we are currently a 2 lake front farm. This makes what was a corn field a big muddy mess! Oh and the corn that is under water won’t make it so we will have a nice reminder of the lakes all year long! That makes the farmers in my life very grumpy! 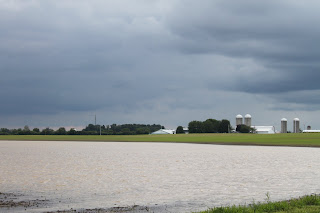 Lake # 1 – I feel like I should come up with some better names for our lakes. 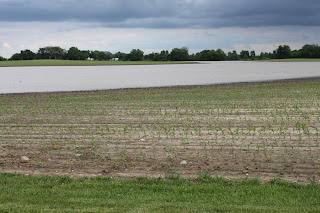 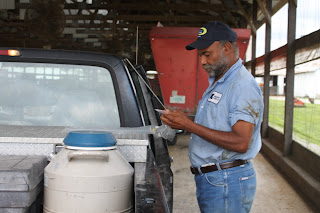 Well on with the show! Meet Earl. Earl is the man on the farm! I mean he is a man and he is “the man” and he preforms a manly task on the farm. Yes, there are lots of manly tasks but he preforms the manliest.
Confused?
Well, you see the tank with the blue lid?
That tank is filled with semen. Yes….I just said semen.
Let me clarify that tank is filled with bovine semen.
Earl’s job on the farm is to get the job done, if you know what I’m talking about!
Earl is in charge of the breeding on the farm. Let me clarify once again Earl is in charge of all the cow breeding on the farm. The cats handle their breeding all on their own and by looking at all the cats we have they do a pretty good job! 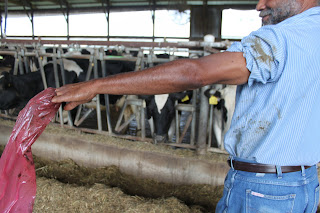 Earl was made for this job! He has nice long skinny arms…in fact I think they are skinnier than mine…must be all my muscles…just let me believe that is the case!
A couple facts:
1. The goal is to have each cow pregnant once a year.
2. A cow must have a calf in order to give milk.
3. The gestation period of a cow is 9 months.
Earl was born in Nicaragua but has lived in the states for years and has been working for us for over 6 years.
Earl is really good at his job. I mean really good… It’s okay to start giggling like a school girl at this part… I did when I wrote it!
In all seriousness he has a really high conception rate! So, high that in 2010 the farm received an award for his hard work! We were Honorable Mention (We were in the top 15 in the country) for The Dairy Cattle Reproduction Council Reproduction Awards!! Woot!! Woot!!
I bet you didn’t know they had such awards!! Haha!
Could you imagine seeing that on a resume! You might on a dairy resume! 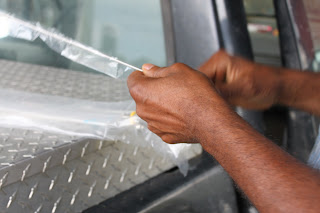 So here is Earl doing what he does so well. This is a straw that helps the semen get to where it needs to go! 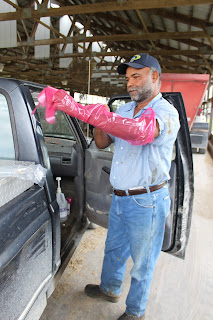 Earl is so manly he wears pink daily! You will see shortly why such a big glove is needed during this process! 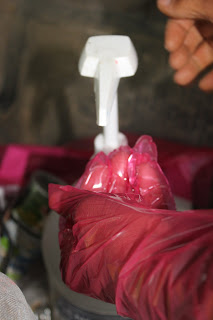 Time for lube to help reduce the friction! You can giggle here too!! 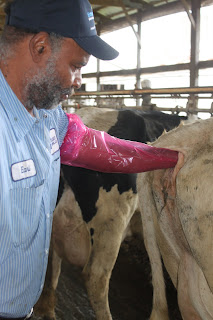 In we go!
The first thing you do for bovine artificial insemination (and yes I have done this before! I actually took 2 classes on it! And I have the certificates to prove it!) is empty the the “out hole” or that’s what we like to call it!
I am going to get really simple in the process to make it less confusing. So, if I get crude, so sorry.
The baby making parts are under the poop making parts. So, once you are in the out hole you remove any poo that might be hanging out. 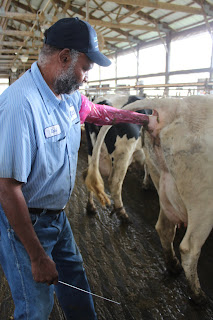 The goal with the gloved hand is to gently find the outline of the cervix. 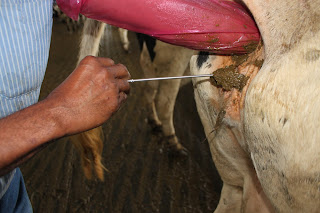 You then use a “gun” with the semen straw that goes in the “in hole” and navigate the gun through the cervix. And release the semen. 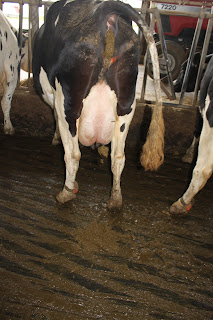 Can you imagine a job where you literally get shit on… hehe!
As Earl was finishing up both cows on either side of the cow he was breeding decided to let it go! This is the picture they couldn’t believe I was going to post… but I did!! I want to give you the real deal! 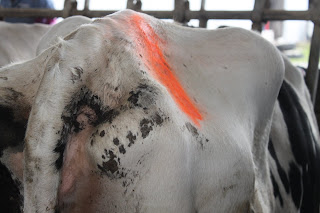 During tours, we get a lot of questions about why cows have bright colored marks on them. It is all Earl. I can’t tell you exactly what they mean but I do know that Earl knows and that is what is important!!
He uses these marks to help him remember certain things about a cow. Most likely she isn’t pregnant or maybe he needs to watch her closely to see when she comes in to heat, etc. 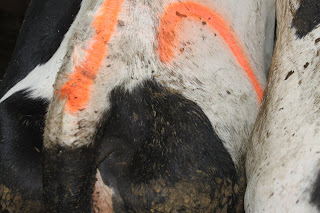 Now, I know what you are thinking. What about bulls? We usually have one bull on the farm. He gets called in when Earl has a problem getting a cow pregnant. Normally it is a young bull that is not full grown and if he would ever get nasty he goes bye bye.
Bulls are very dangerous! They can weigh a lot and can be very aggressive. Which are the reasons most dairy farmers use artificial insemination. Could you imagine a 2,000 pound bull jumping on your back every time he wanted to get frisky? Bulls have even killed humans so it is very important to know what you are doing around a bull!

Now, I bet you didn’t see all this coming!! So, go grab a latte and visit the rest of our Real Farmwives of America farm friends and there “Dirty Job” posts!

Have a great weekend!!

« A Girl and her Shoes!
Bucket Blogs »